Shadow - the lovely boy at the front 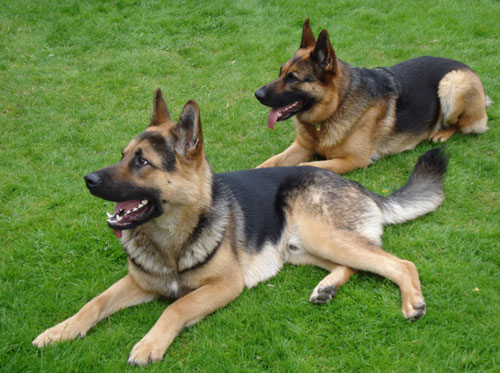 This is a lovely boy he came in with sister Ella who has now found her new home, When Shadow came to us he was very excitable and bouncy he has now calmed down and a very happy dog. he has never shown any aggression to any of the other dogs, the cats around he looks at but when asked to continue on his walk he does so with no bother. He needs a family that likes exercise as he will need lots to burn off his energy. He is fine with children no aggression but we feel he may be better suited with older children just because of his size and the fact that he is still bouncy and may knock them over.He has been vaccinated. All in all will make a very good family dog. Although crossed with an Akita Shadow, has the temperament of a GSD. He is happy to be with you and will make someone an excellent ‘pal’. 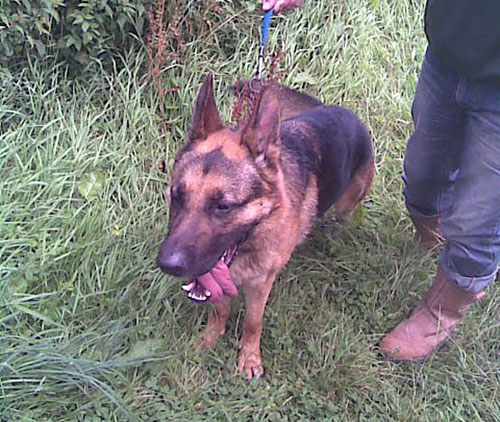 Jerry is nearly 5 years old and entire, he has a lovely nature and did not show any signs of aggression. He is quite boisterous but this is due to him not getting any stimulation of any kind. With the right owner, he will make an excellent companion, he is very thin so will need small regular meals to build him up. Ok with other dogs and children 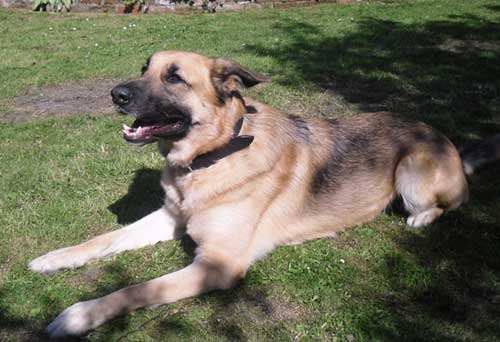 Samson is simply stunning - although his ears don't point North, he is very handsome.  He is a 2? year old neutered male, he is fully vaccinated and wormed.  Samson has a lovely temperament, was very welcoming when I went into the home and is well behaved. The current owner has been working on training him but unfortunately, due to her health, she is not able to continue.  He has lived with children but can be a bit quick in taking food, so older children may be better for him. He currently lives with an older labrador and two cats.  Unfortunately, the owner has not had the confidence herself to introduce him to dogs outside the home so is not sure how he would react. He does jump up but she feels this is wanting to play rather than out of aggression.  He is living with two cats but again careful introduction as he really wants to play.  Samson was bounding around like "tigger" in the owner's garden when I tried to take some photos.  He did jump up and nip, this was purely out of excitement and not aggression and when told not to he came, laid down and calmed down.  This young lad needs a home where his training will continue and he will get plenty of exercise. 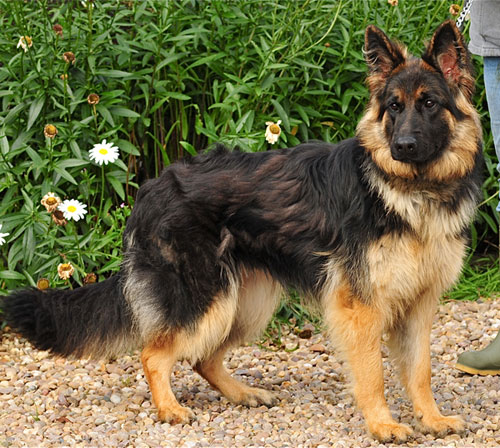 Kelsey has come to the rescue as her owner has suffered a stroke and has sadly had to part with her due to health reasons.  Lovely long wavy coat, beautiful looking dog.  Friendly and seems OK with the other dogs at the kennels.  Kelsey is 14 months old and her date of birth is 23.6.08.  She is micro chipped. KC vaccination due November 09 and she is due this month her normal vaccinations. Kelsey has been spayed.  She has passed her good citizen puppy training on November 08, and the paperwork that came with her says both her parents had excellent hip scores. 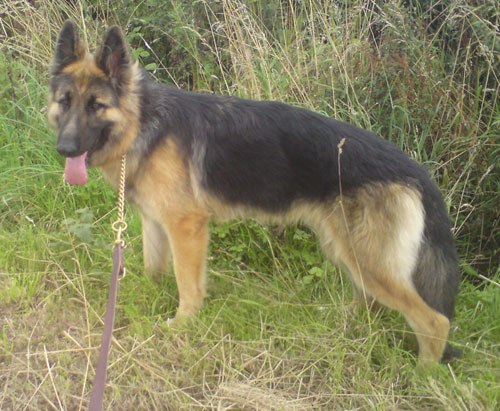 This young lad is only a year old but has spent his short life on a chain. He was rescued from that fate and in spite of this bad start, he has a wonderful temperament. He is lovely with people and fine with other dogs. He is a little underweight, very food orientated and will steal food if the chance arises. He was a little anxious at first but after 48 hours he is settling down and not so worried. He has been on long walks which he loves although his lead work needs a bit of attention. He is clean in the house and sleeps all through the night. He is currently in foster mixing with 4 other shepherds. Will make a super family pet and would suit a young active family. He may need a new name as he doesn't respond to Prince 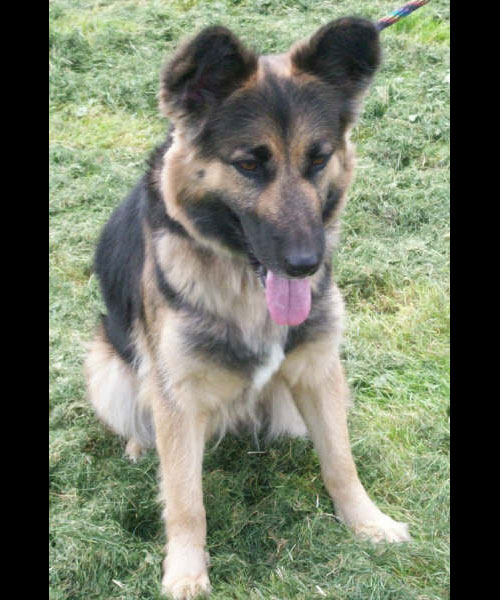 This poor little dog is stressed, not surprising really as she has been passed from pillar to post. Microchipped to an address in Coventry, owner rehomed her to someone in Dudley 3 months ago, unfortunately, they do not have the details of the new owner! It appears she has had 3 homes in 3 months. Kennel guards but has been lovely with the kennels staff. 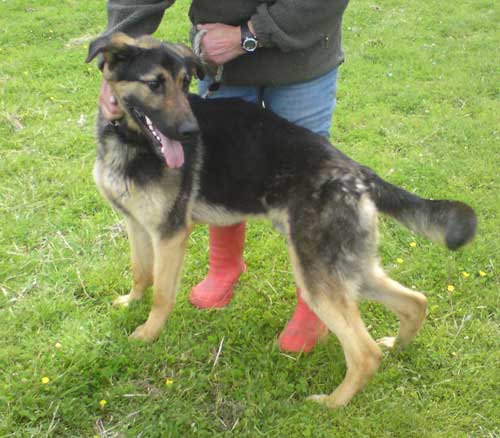 This is our Kev who is 100% fun. We reckon he is crossed with a kangaroo - he has huge powerful back legs but someone gave him the wrong head. It's a bit small and his ears are floppy but very cute!! As GSD's go, he is big being tall and long in the body. No to young kids as he big and bouncy and jumps up and he mouths if you allow him to. He would love a family with teenagers who would play footie with him. He needs lots of exercise, he is bored in kennels and needs a home now. Needs fit owners. 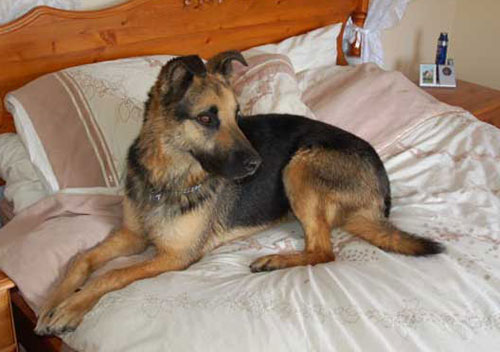 Not much was known about Bruno, other than he had been used as a guard dog but the company had been bought out and they were now going to use 24 hr CCTV instead. So Bruno wasn't needed anymore, if we couldn't find him somewhere quickly he would be put to sleep Bruno is a three yr old entire male, who had lived in a car in an enclosure and been used to guard but he is a very loving boy who loves his cuddles and a game of ball but makes all the right noises when needed. He had mixed with the workers' other dogs and seemed fine, but he was not used to cats or children or normal family life. Of course, we wanted Bruno to have the chance of a good life after what he had been through so he was picked up by a volunteer and taken to her home. Bruno was allowed in the house and turned out to be a perfect house guest. No whining, no howling, no accidents, and nothing destroyed he just curled up and went to sleep!! His new owner has rejected him and threatened to have him put to sleep because he grabs the lead when he is excited about going for a walk!!!. 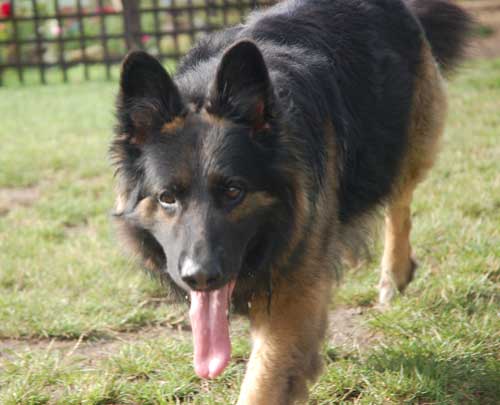 Riggs is a beautiful loving 5 yr old semi coated male, He is good with children and bitches unsure about male dogs, he has chased a cat but with no aggression. He is not microchipped or vaccinated. Riggs is looking for a new home because his owner has moved into a flat and he has had to stay in the empty house with relatives going in to let him out to toilet but this can only be temporary until the owner has to hand the keys in. His claws are disgusting and he obviously hasn't been walked much. The owner didn't know if he was castrated or not!!!!!. 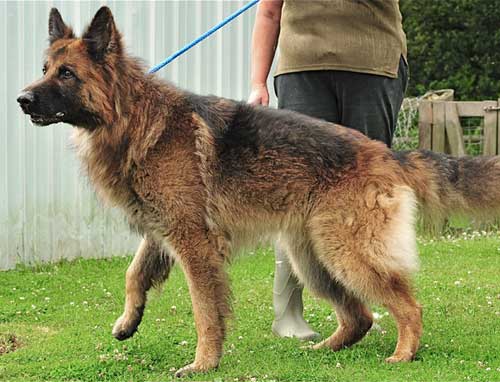 Kye is a massive big bear of a dog. Entire, 7 years old, supposedly good with children and female dogs. No cats. Pulls on lead. Travels well. Came out of a home because the Landlord would not allow owners have him.