We Need Your Help

DESPERATE SITUATION IN RESCUES ACROSS THE UK - All rescues in the UK have reached crisis point with probably one of the worst influxes of dogs ever. Hundreds of dogs are being destroyed every week by the pounds because there is just nowhere for these dogs to go and they need space for the next influx. Don't come to us looking for puppies or designer dogs and don't give your money to irresponsible breeders. There are thousands of beautiful dogs of all ages, shapes and sizes across the UK looking for nice homes. Please give them a chance. Check our urgent pages and dogs by region or get along to your local rescues and check whats available.................................................. WE NEED HOMES NOT MORE DOGS!!!!

UPDATE: We urgently need a forever home for Rebel

UPDATE: Rebel has now greatly improved and hasn't required any further intervention or medication. The rescue will help with costs for any further treatment for this condition.

UPDATE: So far we have raised nearly £300 towards Rebels vet treatment which to date has cost the rescue nearly £700.

We urgently need to raise funds - can you help us? 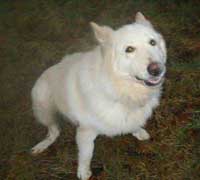 The rescue recently received several desperate phonecalls from a lady informing us of Rebel who had not been out of his home for weeks and who was not being fed. She had provided some food out of her own pocket but was doubtful that the owner was giving the food to Rebel. This poor dog was being left alone for days without attention whilst the owner was away getting drunk.

Both a large welfare organisation and the police had been notified and had failed to help poor Rebel.

When one of our volunteers went to see Rebs it was quite clear that one room of the accomodation had been cleared and was being used as a kennel. Rebel was going to the toilet in this room and having to lie in it because the owner was not clearing up the mess. we believe the dog was given bits of bread as food.

Our volunteer immediately lifted Rebs and took him to a vets where he had to anaesthetised so that he could be cleaned up and assessed.

Rebel is now with a very kind foster home where he is improving and looking much happier. 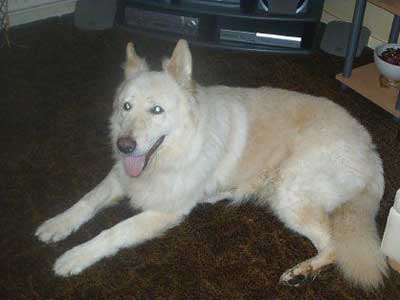 Rebel has had a problem which has required medical treatment He has been having great difficulty urinating and has already had to be catheterised once to empty his bladder. This problem may have been brought on by the fact that he was left for such long periods locked up and was trying to hold himself because he didn't want to go to the toilet in the house.

The vet that was initially treating Rebel has refused to give us discount and has already charged us several hundred pounds. We are switching to another vet futher away but we still need to find more money for his ongoing treatments.