POLLY - A DOG WHO CAME FOR A REASON

The following story is about my German Shep girl, Polly. In part it's sad, but really it's a story of hope. It’s a story that proves that these bewildered, often misunderstood, abandoned and mistreated dogs can be transformed into the wonderful, loving, loyal companions they were always meant to be.

Four and a half years ago my husband, Tom, and myself decided to offer a home to a rescue dog. We already had two elderly Golden Retrievers and neither of us had any experience of German Shepherds but I was really keen as I thought they always looked such lovely dogs. So I contacted GSDR, we were homechecked and we were invited to go to the kennels to see the dogs available. I remember Polly jumping up and down in her kennel and making a lot of noise and she was brought out to meet us and our Retrievers. We liked her, she took no notice of our dogs, she was obviously very bewildered and clearly needed out of kennels asap. Tom and I thought she looked fine to us and we arranged to adopt her and pick her up the following Tuesday morning. 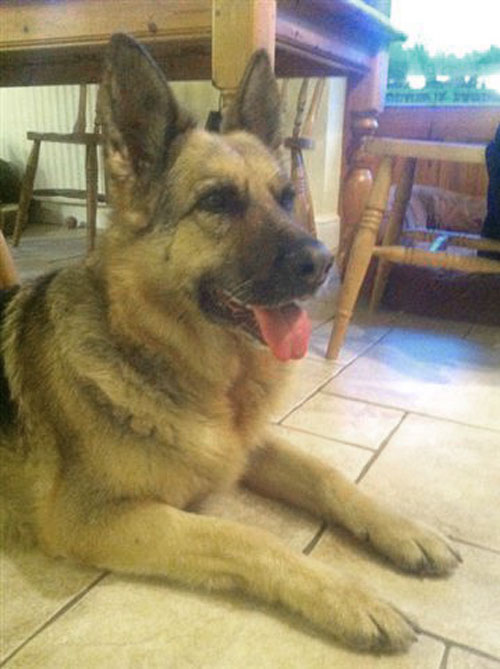 Polly's history was largely unknown, she'd been thrown into the pound by her 'owner' who claimed she was aggressive, had allegedly bitten and was so bad he recommended she was put straight to sleep and not given the 7 days. She was put in a pound kennel where she started kennel guarding and showing her teeth. The manager of the pound agreed with the 'owner' but luckily he contacted GSR who sent a volunteer to see her as she was at imminent risk of euthanasia. The volunteer realised she was no threat to anyone, once she was out of the kennel, and took her into GSR kennels. We took her home a few weeks later.

We picked her up, she was uncertain but she jumped in the boot but she got so frightened that Tom climbed in with her till we got home. We introduced her to the other dogs and it went well. I planned the house to be quiet to try and let her settle but she was restless and anxious for a few hours. It was obvious that she was very naive, she'd not seen grass, carpet, food bowl or nothing. She wasn't housetrained and it looked like she'd been punished for going to the toilet and the way she flinched at any movement made me realise she'd been hit many times. Now she was home I realised her head had been 'blown' and she needed a lot of help. She didn't know right from wrong and she was a challenge alright. Polly was very excitable and she couldn't focus for a minute, we had to take her in the garden on a lead as she would have just run off. Polly had obviously had a bad life and had struggled but we were so glad she'd come to us. Tom thought she was wonderful and she latched on to him, she would have been a man's dog I think. They were a happy few days, despite her being as she was, and none of us knew the ordeal we were about to face.

Polly - great comfort to her mum in tragic times 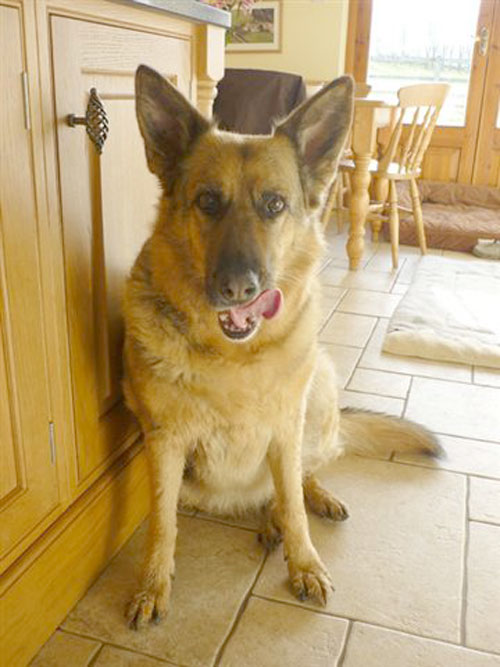 I'll keep this bit brief out of respect for my family's personal privacy and it's simply too painful to repeat as it was so terribly tragic and can still hurt. The following Friday morning I woke early and knew something was wrong and got up immediately. The unimaginable had happened, I had lost my husband and the nightmare started. I don't remember a lot of what happened in those early days and months, but some things are crystal clear.  There was chaos, the kids and I were distraught beyond description and I can't articulate the horror of that day. The first recollection I have of Polly's devotion was her trying to help me. This shellshocked dog, who had been given nothing, knew I was struggling and tried to comfort me in the only way she could.  Despite the mayhem she sat next to me with her head on my knee, I couldn't speak, I was too shocked, and I just stroked her head. It was suggested that it might be best for Polly to go back to the rescue but I wasn't having that, she needed me and, now, I needed her and from that day on she never let me down.

I don't know how we all muddled through those early months. I dealt with my grief by walking miles and miles. The Retrievers were infirm and happy to stay home with each other. Polly came everywhere with me, she learned the joys of running free and how to play and swim in the river, I just sat on the bank, vacant, I would think.

After about a month I 'hit a wall' and didn't know how I could cope or how to go about it. I took off on my own one morning and walked and walked till I came to the church and I just stood there. Unbeknown to me Polly had followed me (I later realised she had opened a kitchen window and jumped out) and she was just sat quietly behind me. At that moment I remember being incredibly grateful to her for being there, she pulled me back and I suddenly knew what I had to do. I realised what Tom would want me to do too.  And me and Polly did it - we trudged home and started again and looked after ourselves as best we could. 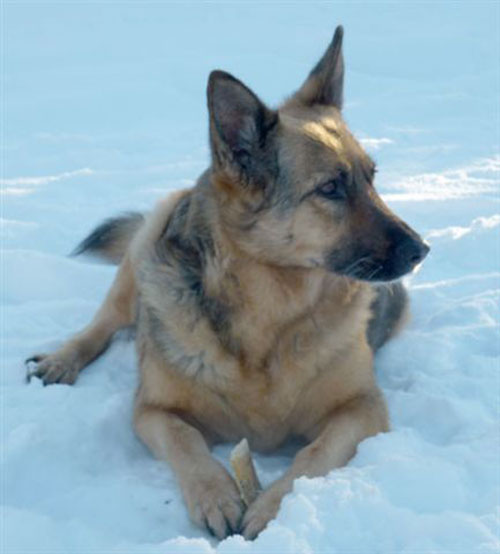 Polly was a sharp, lively dog who liked to be in the thick of things and always wanted to first on the scene in anything. She would run next to my quad bike or get in the trailer behind, usually with a ball in her mouth. She was so lovely and very kind natured and I could take her anywhere and be proud of her. So many people commented that she changed their opinion of the breed. We went to Dog training classes, she won her medals and was even invited to train for the North Yorkshire demonstration obedience team. She was totally unsocialised before she came and she never wanted to play with other dogs, but she always let other dogs into her home with utter grace and goodwill. She was my best friend.

Let's not forget that this dog was thrown into the pound at the point of euthanasia. Polly was an innocent, her previous issues weren't her own as they were man made by disgusting people not worthy of her.  It is vile and despicable that so many of these dogs face that through no fault of their own. She was only 3 and at her wit's end. These Sheps need to be in the right hands - that's all.

Polly had joint disease and needed pain killers for the last two years, most likely caused by mistreatment as a youngster. This year she slowed down but she was happy enough. In late summer I became very worried as she wasn't herself at all and had stopped following me about. Nothing could be found as a cause and she was booked in for scans/x-rays to try and find what was wrong. The weekend before that Monday I knew it was serious and on the Sunday I knew in my heart that she wouldn't be coming home from the vet, but she was comfortable and I hoped against hope I was wrong. She just wanted to be with me so I laid with her, that day, wherever she wanted to be. I laid with her while she was sedated and told her all I thought she needed to hear from me while she went to sleep. The scan showed an inoperable, large tumour and I had no choice but to let her sleep on, and I laid with her again. Polly died on September 10th.

I have written this as a tribute to my beautiful girl as it's the one thing I can do for her now, but also as a plea to those of you who may be considering adopting a GSD. I can only encourage you as they are such wonderful dogs in the right home. They will love you and yours above all else and they would lay their lives down for you in an instant. Their love and loyalty is amazing and they can be so entertaining.

Taking a rescue dog is extremely rewarding but it can be hard too, particularly at the beginning. It requires patience, leadership, tolerance, kindness, airness and a sense of humour at times. These dogs can be desperate and need their people near them, keeping them on the straight and narrow. They will bond quickly but they need time to trust, adjust and re-learn. They can and they will do that if shown the correct way. None of them are born with issues, they've been in the wrong hands.

If you are capable of taking one of these often misunderstood dogs home, do it. I can assure you that you will have the best friend you've ever had.