THIS IS AN OUTRAGE. This handler has not been suspended. Please sign this petition, this handler must be suspended with immediate effect and face prosecution.

Week beginning 20th July, we were contacted by an insider and given the name of the handler involved. This information was given to the Daily Mail who have published the story on page 20 in the Mail Monday 27th July. Not one single word in the article about where they obtained the information from and no doubt we will never see the donation to the rescue that the reporter promised.

Mark Johnson - and Jet, one of the dogs that died 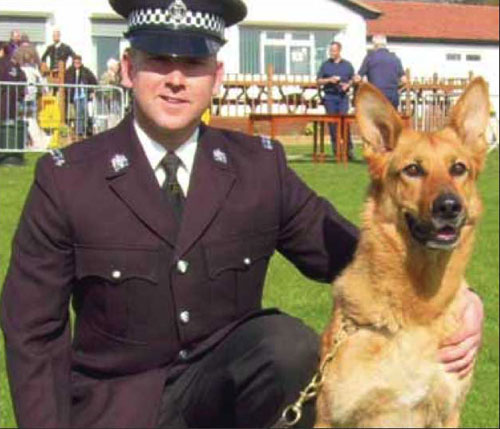 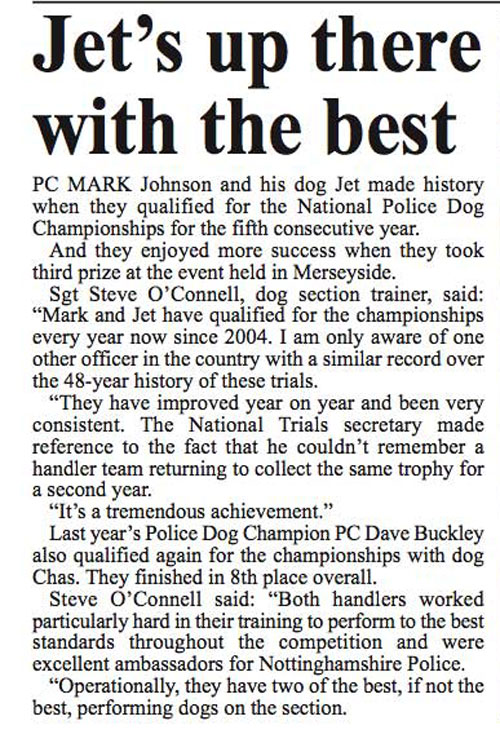 The 2 dogs that died in his car we believe are Jet pictured above who was due to retire and a young dog called JJ. It is believed that the two dogs were locked in the car by the handler and left while he popped into the office. The Police have refused to name the officer and it was a volunteer from this rescue that obtained his name and gave it to the Daily Mail. It would appear that the officer is away on holiday at the moment.

How sad that this handler seems to have cared so little about a dog that had given him so much recognition.

The investigation of this case will no doubt be a whitewash. The RSPCA will milk the situation for as much publicity as they can and there will be no prosecution.

This was not a tragic incident - we believe it was negligence and gross professional misconduct.

From This Is Nottingham

Police dogs die in car during heatwave
Thursday, July 02, 2009, 07:00
THE RSPCA is investigating after two police dogs died when they were allegedly left in a dog handler's car during the heatwave.
The German Shepherds were found in the car at Notts Police's headquarters in Arnold on Tuesday.
The Post understands the police dog handler was off duty but had called into the headquarters at Sherwood Lodge, Arnold.
It is unclear how long the dogs had been in the car on what was the hottest day in Notts for three years – with temperatures rising to 29.3 degrees celsius.
The RSPCA has launched an investigation into the incident.
A spokeswoman from the charity said: "We are investigating two dogs which have died in a hot car.
"When it's sunny or warm outside, we would urge dog owners not to leave a dog in a car. It can cause health problems and prove fatal. Temperatures can rise to 47 degrees celsius in a car quite quickly and that is enough to kill a dog."
A Notts police spokesman said: "Nottinghamshire Police reported the death of two German shepherd police dogs to the RSPCA on Tuesday, June 30, after they were discovered at force headquarters at 2.15pm.
"The incident has also been voluntarily referred to the Independent Police Complaints Commission.
"The welfare of all animals owned by Nottinghamshire Police is of paramount importance and we endeavour to take every measure possible to ensure their well-being and safety."
The spokesperson said the force could not confirm any further details about the incident, but said no one had been suspended.
Notts Assistant Chief Constable Peter Davies said: ''This is a tragic incident and we value the important work our police dogs carry out on a daily basis. That is why we swiftly reported this incident to the RSPCA and we will be working with them very closely."
Coun John Clarke, Chairman of Nottinghamshire Police Authority, said: "This is a truly tragic incident. I am deeply disturbed to learn of the deaths of these police dogs, which play such a vital role in the fight against crime.
"The RSPCA has been informed and will, I am sure, carry out a thorough and speedy investigation.
''The authority has asked to be provided at the appropriate time with a full report into the circumstances.
"In the meantime, we are requiring a guarantee from the force that measures are being put in place immediately to ensure that an incident like this can never happen again."

Two police dogs have died in a hot vehicle parked outside the headquarters of Nottinghamshire Police.

An RSPCA officer was called to the Sherwood Lodge headquarters in Arnold on Tuesday and found two German shepherd dogs dead.

An independent vet is carrying out post-mortem tests to establish how the animals died.

The Independent Police Complaints Commission (IPCC) has launched an investigation into the incident.

'Swiftly reported'
Nottinghamshire's Assistant Chief Constable, Peter Davies, said: "This is a tragic incident and we value the important work our police dogs carry out on a daily basis.

"That is why we swiftly reported this incident to the RSPCA and we will be working with them very closely."

In a statement, Nottinghamshire Police said the welfare of all animals owned by them was, "of paramount importance and we endeavour to take every measure possible to ensure their well-being and safety".

The force refused to say what kind of vehicle was involved.

Nottinghamshire vet Andrew Wilson said: "The dehydration would have been a big factor.

"They wouldn't be able to cool themselves because panting wouldn't be effective any more, there would be no evaporation from the tongue.

Why has nobody been suspended? The heat wave has been forecasted all week. Why were these poor dogs left to suffer and die like this?

THIS IS AN OUTRAGE. WE WANT YOU ALL TO RING THE RSPCA, THERE MUST BE A PROSECUTION FOR CRUELTY.