News of the World

Ayr police were contacted over this issue and went out to see the appalling injuries inflicted on these two chumps. What did the police do - they found that there was no case to answer!! What does that tell you?

Sunday 15th April, the above rag published a story concerning a dog biting. Below is the real story.

Mr and Mrs Brown from 25 George Street, Doonfoot, Ayrshire were recently homechecked by the SSPCA and passed as suitable to rehome a GSD. Indeed Mrs Brown claimed she had a wealth of experience with training difficult dogs and related the story of her last dog who had been a real challenge. She agreed to foster Skye, a young GSD bitch that required some training.

On the day they were due to pick up Skye, Mrs Brown didn't even bother to turn up. Instead Mr Brown arrived with an aquaintance (not best pal as described in the article) who had ageed to drive him to the pick up point. 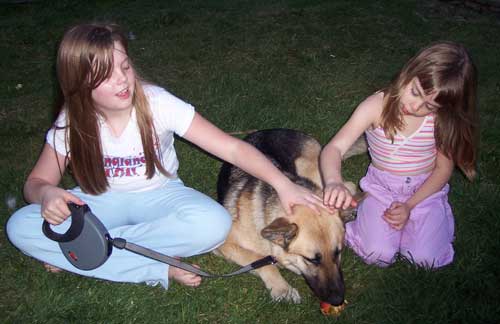 Skye happily playing with her new friends 11 and 6 years old. When you read what the newspaper printed - something doesn't quite add up does it? Where is the evil, vicious, possessed dog described by Mr Brown and Mr Devine?

Donald Brown 'The 48 year old from Ayr said last night: 'She tried to eat me alive - she wanted me for dinner". '

'........ jobless Donald said "When I went to say hello to Sky she bit my hand. There wasn't any warning she just pounced. And she was such a cute thing too" Paul Devine 56, then needed hospital treatment after the hound clamped his hand in her jaws too. He moaned: "All I did was hand her a toy but she went for me, too. That was the thanks I got.

"It was a killer instinct. Blood was dripping from my hand like a horror film - Skye was like something possessed. I needed a tetanus injection and I am on antibiotics."

'Now Donald plans to hit bark by suing the kennels who sold her under the Trades Descriptions Act.'

Mr Brown did not buy / was not sold anything. Mrs Brown had agreed to foster Skye, no mention of any payment was made. 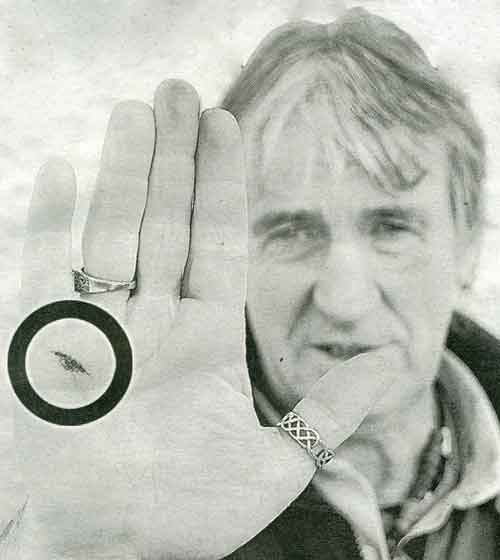 This was the picture showing the terrible injuries inflicted on Mr Devine - shocking! The black circle in the newspaper article is to help you find the appalling wounds.

No pictures appeared showing Donald's injuries. Perhaps he was too badly injured and too traumatised to show his wounds.

Skye was lying quietly by the side of a rescue volunteer when Mr Devine leaned over and thrust his grubby hand in her face.

'Donald gave the pedigree chump back - and he and his wife Teresa 34, now plan to sue the kennels.'

We don't have kennels and you didn't hand the 'chump' back, our volunteer decided the two chumps standing in front of her weren't fit to be around Skye.

No doubt 'jobless' Donald and his friend saw an opportunity here and thought that they might try and make a few quid by trying to sue a voluntary organisation. Well we are worth nothing, but maybe we could offer you some common sense! Don't stick your hand out in front of a German Shepherd you have never met before!! 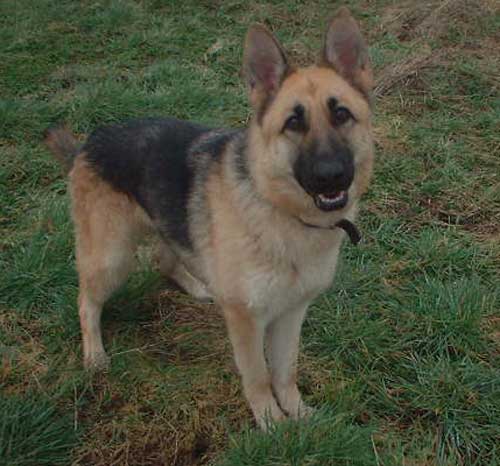 For all of those concerned about poor Skye, she is safe and well after her ordeal and enjoying life in her new foster home playing with the kids and the other animals.

The newspaper wrongly stated that our kennel spokeswoman (we don't have one) said "Skye suffered from nervous aggression and that she could bite."

Skye has never suffered from nervousness, she is a very sharp intelligent outgoing young lady - and a very good judge of character by all accounts!!

We are still looking for a new home for Skye. All we ask is that her new family are fit and active, that someone in the family is employed, that they have had a GSD before and that they have an IQ greater than their ages!!

This rag should stick to the only thing they are good at - stories about NAKED WOMEN WITH LARGE BREASTS.

Spare us from these morons.

Email your opinion to the Editor of this paper