The Health Benefits of Living with Dogs

The Health Benefits of Living with Dogs

So, as a society, instead of making rules which restrict the enjoyment of dogs, which curtail the freedoms of dogs and their owners and actively discriminate against them, instead of demonizing dogs by making them out to be ‘dangerous’, we should actively be encouraging families to adopt the many thousands of lonely, desperate dogs sitting in shelters up and down the country and encouraging responsible and healthy relationships with our canine companions. They’ve been with us a very long time and we now appear to be deserting them. But at what cost to our well-being?

The benefits to human health associated with having a canine companion around the house are numerous, but very often understated. Some are pretty obvious. If you take looking after your dog(s) seriously, you will be out walking with them for at least a couple of hours a day, exercising them and yourself. If you have young dogs and you walk briskly or even jog, then you are going to be burning off calories working out doing something which is hopefully enjoyable for both you and your dogs. Even a slower ramble with the oldies strengthens bone and muscle and gets your circulation going, helping to unclog those veins and arteries which our increasingly sedentary lifestyles impose upon us. It’s not just the physical benefits of walking either; just being out and about in the fresh air and the sunshine (or even the wind and the rain!) is mentally stimulating and one of the best cures for mild to moderate depression. Seeing your dogs happy and running around playing, sniffing, doing doggy things and generally just enjoying themselves is uplifting in itself. 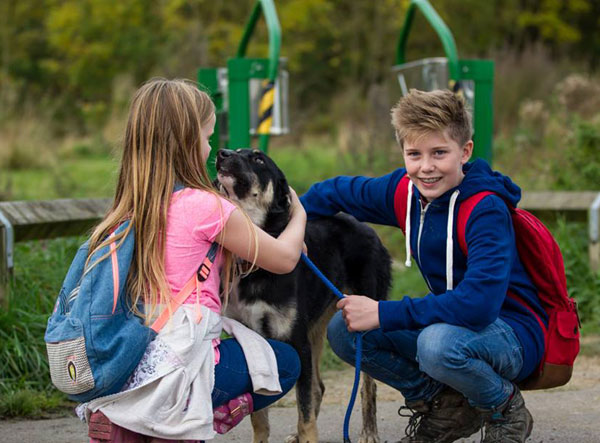 If children are brought up with pets, they learn respect for other species

But it goes much deeper than this. Our chemistry and biology are attuned to canines in such a way that, in fact, not having dogs around is actually detrimental to our physical, emotional and mental wellbeing! If you have grown up in a household without the friendly wagging tail and toothy smile of the family hound, you have missed out considerably, in so many different ways. But why, I hear people ask? What’s so special about dogs? To which the answer is: we have evolved with canines over a period of at least 40,000 years – far longer than any other species of domesticated animal – and it is this unique symbiotic evolutionary relationship which has bonded us (mutually beneficially) so closely to our canine companions. 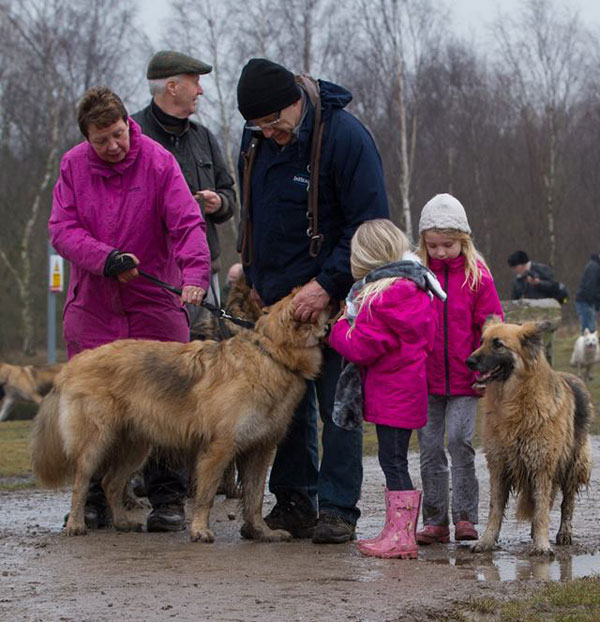 Pets are important for all the family

Humans and canines go way back into the depths of the last Ice Age when great sheets of ice over a mile thick covered much of the northern parts of North America and Eurasia. It is in this harsh and unforgiving landscape that the Tale of Two Legs and Four Paws really begins. Neanderthals (our close Hominid cousins) were numerous and widespread in Europe and Asia at that time. Anatomically modern humans started moving north into Europe from Africa in waves beginning around 40,000 BCE (during the Ice Age) to 15000BCE (when the vast glaciers finally began to melt and recede). Wolves and Neanderthals and countless other Pleistocene mammals roamed the cold, arid, windswept plains just south of the main glaciers. Homo Sapiens arrived in this frigid Garden of Eden and things began to change. Neanderthals died out eventually (though there were still tiny pockets of them about 8000BCE) and in some cases interbred with modern humans. The once huge and amazing variety of Pleistocene plains fauna also dwindled, probably from a combination of over-hunting and climate change. Homo Sapiens thrived, however– and they domesticated wolves. 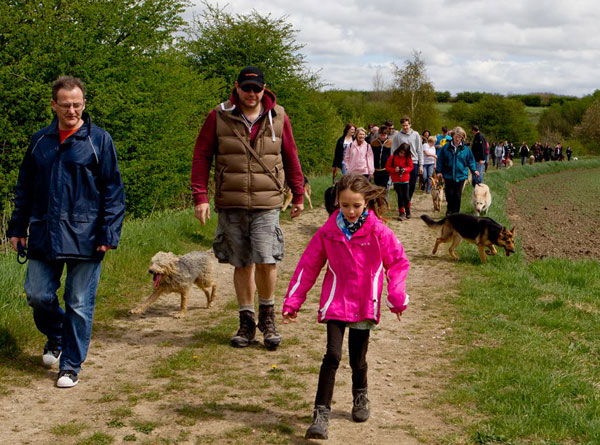 Much better than sitting in front of a TV or computer. No mobile phone in sight!

According to some scientists, it was this very act of domestication of canines which gave modern humans the crucial edge over Neanderthals and which led to the latter’s long, slow demise. Dogs (friendly wolves) were excellent companions on hunts, with their superior speed, agility and tracking abilities. They were also extremely good as an early warning system around the encampments, alerting humans to the presence of danger, probably even deterring dangerous predatory animals or even rival tribes from coming near. This was, of course, many thousands of years before dogs were used as shepherds and herd guards – human society at this time was exclusively nomadic hunter-gatherer. So, in some ways, we owe our very existence to our unique friendship with dogs – we might never have thrived as a globally dominant species had we not had the benefit of hounds by our side:

Did Dog-Human Alliance Drive Out the Neanderthals

But really, the truth is, we didn’t domesticate dogs; they probably domesticated us!

Scientists are finding more and more surprising ways in which dogs benefit us. As with most health-giving things, the earlier in life we are exposed to them the better. Many of us grew up with pet dogs. We learned respect for them from an early age and thus respect for other living creatures. They taught our young minds about love and trust and unconditional friendship. But being with dogs during our crucial development may also have protected us from a whole host of allergies which plague modern childhood and in the process, strengthened and augmented our juvenile immune systems such that we are even now reaping the benefits well into adult life. Recent scientific studies have found that indeed asthma and other allergies are more likely to afflict children who have been brought up in households without pets, especially dogs. I quote:

“In earlier work, Fujimura found that house dust from homes with cats and dogs had significantly different types of bacteria than dust from homes without pets. And previous studies have suggested that early life pet exposure and ownership is associated with reduced risk of asthma. “This led us to speculate that microbes within dog-associated house dust may colonize the GI tract, modulate immune responses and protect the host against an asthma genic pathogen, RSV,” she said.”

Why Having a Dog Helps Keep Kids Asthma-Free

By not bringing our children up with dogs, we may not only be damaging their mental and emotional development, we are very likely damaging their physical health. We hear so much these days about children being savaged, even killed by ‘dangerous’ dogs – the vast majority of cases which are due to irresponsible ownership and/or neglect of the animals concerned – but we hear virtually nothing in the mainstream media about how kids are increasingly missing out on sharing their early development with dogs as part of the family. This woman has made sure her little boy has canine companions and she has celebrated that fact with this beautiful photographic tribute to their unique relationship. Many more kids would benefit from the same, but the winds of change are blowing in the complete opposite direction. Kids value their iPads and mobile phones far more than they do their relationship with a family pet. 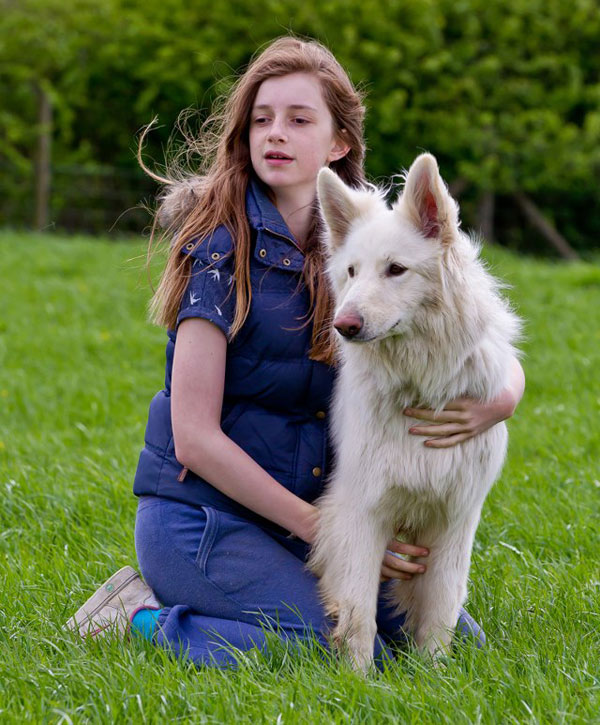 A boy's best friend: Mother captures heartwarming images of the special relationship between her two-year-old toddler and his dogs

Interacting with dogs makes us feel good – and the ‘feel good factor’ is mutual. When we stare into our dogs’ eyes, something very ancient is going on. We are not just sharing an affectionate gaze with them, we are enacting and re-asserting a 40,000-year-old mutually beneficial bond.

“But for scientists, the experiments help solve a perplexing evolutionary mystery: How did two species from very different branches of the evolutionary tree come to live together in such close harmony?The answer is that over eons of co-evolution, dogs probably insinuated themselves into human society by co-opting the behaviour and the neural machinery that draw humans together in tight pair-bonds.”

Which makes it all the more perplexing how some people and cultures can seemingly override their inbuilt neuronal chemistry and look into the eyes of a dog whilst they abuse that animal horribly. I guess the same or similar process is at work which allows some people to abuse defenceless children.

So, as a society, instead of making rules which restrict the enjoyment of dogs, which curtail the freedoms of dogs and their owners and actively discriminate against them, instead of demonizing dogs by making them out to be ‘dangerous’, we should actively be encouraging families to adopt the many thousands of lonely, desperate dogs sitting in shelters up and down the country and encouraging responsible and healthy relationships with our canine companions. They’ve been with us a very long time and we now appear to be deserting them. But at what cost to our well-being? 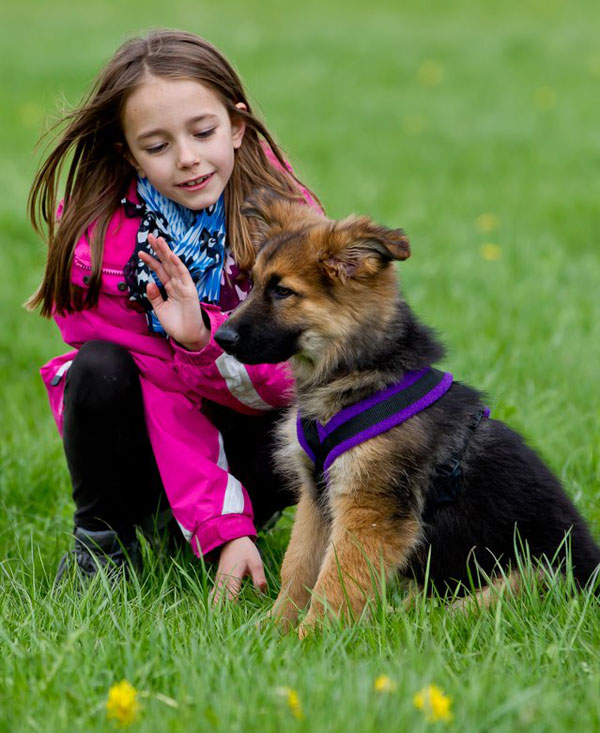 Don't let your kids value their iPads and mobile phones far more than they do their relationship with a family pet.

10 Surprising Reasons Your Dog is Good for Your Health

Evolution shaped genes in humans and dogs that correspond to diet, behavior, and disease, according to a new study. Dog and Human Genomes Evolved Together

Pets are important for you and your family. Children are increasingly missing out on sharing their early development with dogs as part of the family.