Health in the German Shepherd Dog 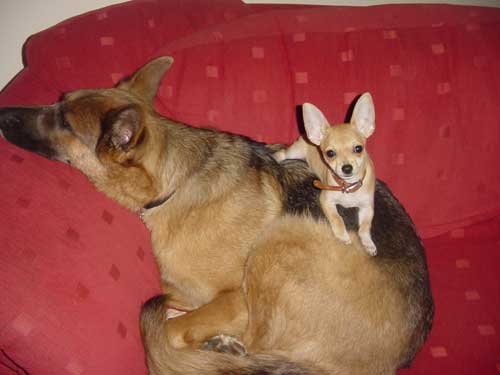 The German Shepherd is normally a fit healthy dog with an average lifespan these days of 12-15yrs, but as with most pedigree breeds, there are certain hereditary conditions that can be a problem as well as other health issues that are more prevalent in this breed which need to be considered if you are thinking of getting a GSD.

If you are buying a German Shepherd puppy it is important to ensure that you only purchase a healthy dog from a reputable breeder and a good idea would be to contact the breed council who should be able to provide you with a list of such breeders. Most reputable breeders don't need to advertise but if they do they tend not to use free papers or other general advertising media but will usually place their advert in a specialist dog magazine or paper. The Kennel Club will provide a list of breeders but this does not signify that they are reputable only that they register their puppies with the KC.

Your puppy should be vaccinated at around 8-10 weeks and again a couple of weeks later to protect against common illnesses and in particular against parvo virus which is a killer. Talk to your vet about routine vaccinations as there is increasing support now for not giving yearly boosters to your dog. Worming your dog once a year is advised as well as treating any flea or tick infestations.

Your German Shepherd will need a good diet from weaning and there is an enormous variety of foodstuffs suitable for this large breed. There is growing interest in feeding a more natural diet rather than dried foods so this is something to think about especially when considering the possible long term effects of diet.

In general, to keep your dog fit and well you need to give him a healthy diet, lots of regular exercise and have lots of time for him. German Shepherds are very sociable dogs, they bond strongly with their family and love to be with them - so have lots of time for him. Brush his coat regularly to keep it nice and shiny and to remove any dead or matted hairs. Don't give him sweeties or other foods that will rot his teeth and make sure his teeth stay clean and free from plaque and tartar. You don't have to brush them, cleaning can be achieved by including in the diet a whole raw rabbit or chicken - bones fur etc. included. Don't cook otherwise the bones will splinter. Crunchy dried foods also may help clean the teeth.

Illnesses seen in the GSD - hereditary and non hereditary

There are some special health problems that are associated with this breed some of which are hereditary and which you may be able to avoid by choosing a reputable breeder.

This is the most common hereditary condition and you can reduce the chances of your dog being affected by checking the hip scores of the parents and by keeping exercise to a gentle level until your dog is at least 6 months old. OCD is a disease which usually affects the shoulder or elbow joints and again can be prevented by keeping exercise down during those early months.

An illness seen quite often in GSD's and although it is quite alarming when it first happens, it can be successfully controlled with medication.

A disease like multiple sclerosis in humans, is a progressive paralysis of the hind legs which generally starts in late middle age and for which there is no treatment.

This is a deep penetrating infection around the anus, the cause of which is unknown but it may be partly due to the German Shepherds large bushy tail, which curves down over the anus and prevents ventilation of the area. Treatment can be surgical or there is some suggestion that cyclosporin may be useful although expensive. It is a condition that unfortunately has a tendency to recur.

This is a blood clotting problem which can lead to uncontrolled bleeding in male dogs so check with the breeder that there is no history of this in the parents. It is the male dogs that are affected by the disease but the bitches can be carriers.

This has become more common in the GSD and the dog becomes unable to digest food properly becoming increasingly thin with excessive appetite. Treatment is lifelong and requires pancreatic enzymes to be given either in powdered form or as capsules with food.

This is a real emergency and a life threatening condition, which has become more common in deep chested dogs over the years. Experts are divided but good tips for reducing the risk are that it is best to feed 2 small meals rather than one large meal a day and to avoid feeding your dog before strenuous exercise.

Can you help us by making a donation? Please click on the link below.