What size, how big, how heavy etc 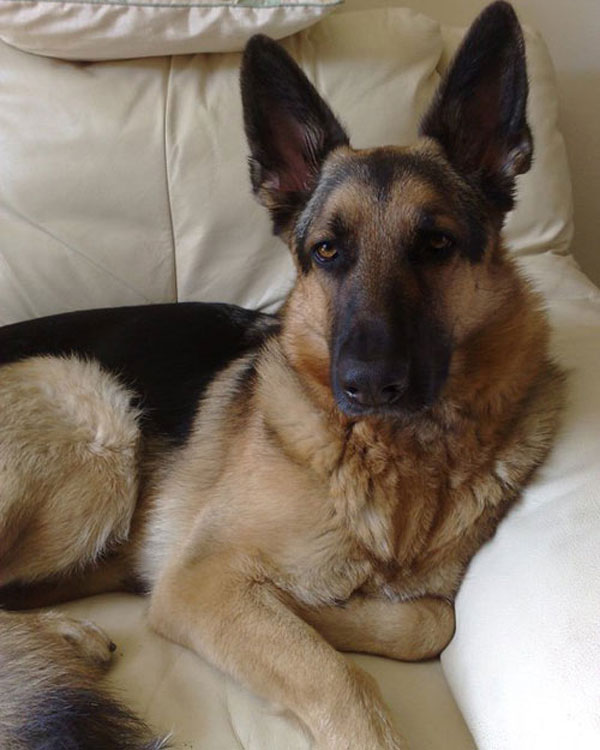 The German Shepherd is classified by the Kennel Club in the pastoral group which is for herding dogs that are associated with working cattle, sheep and other types of herds.

In terms of size GSD,s are large dogs with the males being around 25inches to the shoulder and bitches 23 inches. In terms of weight an average healthy male should be around 35-40 Kg and a bitch slightly less at 30-35 Kg.

A German Shepherd should be slightly long in comparison to height and they should be lean and well muscled not fat and flabby. Probably the most notable features of the GSD are their big sticky up ears which become wonderfully animated when they are listening to you and the big bushy tail which is great for sweeping any low lying tables you may have around the house. They have long muzzles and strong jaws with large sharp teeth, which can inflict a nasty bite on any unsuspecting burglar or poor unfortunate postman.

GSD as often seen in the show ring 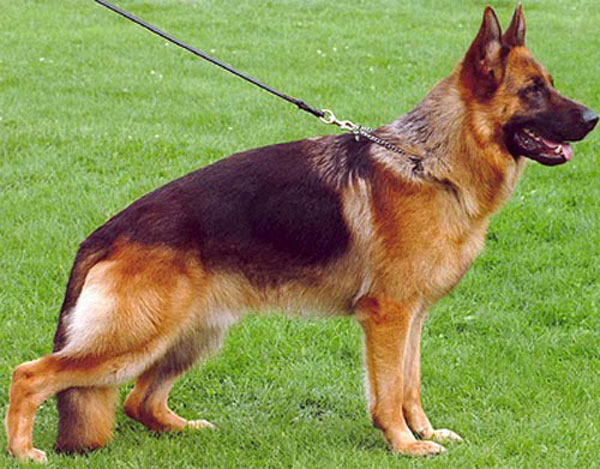 NB. The show dogs have been much criticised and certainly the kennel club and breeders have been blamed for turning these dogs into 'a half frog, half dog'! Personally we like the big straight backed old fashioned English type GSD

The colours accepted by the Kennel Club breed standards are black or black saddle with tan or gold to light grey markings. All black, all grey with lighter or brown markings are called sables. White GSD's for some reason have never been accepted even though they have been around as long as the black and tans. They generally have the same characteristics although it is fair to say that we have seen some pretty bad examples as a result of incorrect breeding. Unfortunately there have been some greedy thoughtless people that have bred the whites purely for money with no thought to temperament or health. Sadly little fluffy white puppies are very cute and so can command high prices. Please remember that these cute little white puppies grow into very large dogs and are basically a German Shepherd in a white fur coat - but still a German Shepherd.

An albino is different and is the result of a genetic defect, which occurs occasionally in most species and where there is no pigmentation in the skin, hair or eyes.

Blue German Shepherds have recently become more common as a result of people deliberately breeding puppies with this genetic defect. The result is that the dogs coat has a diluted colour and rather than black, the hair is a greyish colour and the eyes will usually be quite a strange light colour. Again sadly, blue puppies can fetch a high price and for some people have become desirable designer dogs.

Can you help us by making a donation? Please click on the link below.