The Challenge of 2012 for Rescue

GSDR is experiencing record numbers of applications from owners wishing to rehome their dogs. If we are to keep dogs safe until new homes are found, we will need to have kennel spaces for up to 30 dogs. Thanks to German Shepherd lovers, we were able to raise nearly £9000 from mid-December to the end of January 2012
We need your donations to help us continue.

You can also now set up a standing order to donate monthly to the rescue.
Please download Standing Order Form.

GSDR has seen a 3 fold increase in the number of applications from owners wishing to rehome their dogs from 2009 to 2011 and we expect 2012 numbers to be higher. This is despite the fact that since 2009, we have seen many more rescues springing up across the UK which should have reduced the numbers for us. 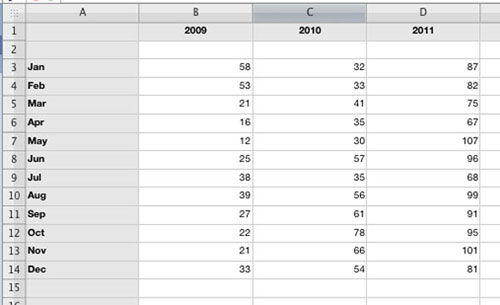 We believe the increase in numbers is due to the following

Below is a summary of how our monies were spent in 2009 and 2010. Our biggest expenses are kennelling and veterinary care. GSDR needs your continued support if we are going to be able to help the record numbers of dogs that will come into rescue in 2012.

Olly Murrs would not be here, were it not for GSDR volunteers! 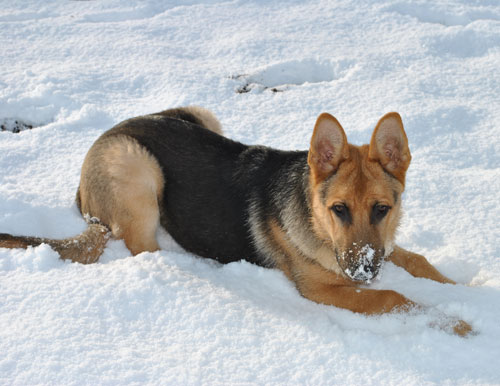 Olly Murrs came to GSDR with his mom, dad and litter brothers and sisters. The puppies were in a terrible state and only survived thanks to the dedication of GSDR volunteers.

We are racing towards the end of 2011 which has turned out to be yet another busy year, but one with additional difficulties that have affected all of us. The recession that started in 2008 is still with us and things may not improve, certainly in the short term.

The biggest problems that we are facing this year are that we have had more dogs than ever before that needed to come into rescue, but fewer quality homes looking to adopt. We have the majority of dogs in foster homes but even so, have been at full capacity with dogs in kennels. Obviously, the more money we raise - the more dogs we can help.

It is worth reflecting on how GSDR has done financially over the last couple of years so that the public can see how successful GSDR has been thanks to the tireless efforts of volunteers and support from the general public.

As you can see, the biggest expenditure for GSDR is our kennelling bill, which last year accounted for a massive 69% of our funds. Since we don't yet have our own centre or kennels, we do still have to rely on commercial boarding kennels to house our urgent dogs waiting for new homes. We do negotiate the best rates that we can and we are very selective about which kennels we use. We have built up very good working relationships with our kennels, who provide an excellent service for our dogs. We generally have between 20-30 dogs in kennels at any one time.

Our second biggest expenditure is veterinary bills coming in at 23% which does not include routine spay/castrate for all dogs that are adopted through GSDR. Since we often take dogs that have either been abandoned in the dog pounds or put up for rehoming because of medical problems, we have faced some pretty hefty vet bills in the last couple of years. 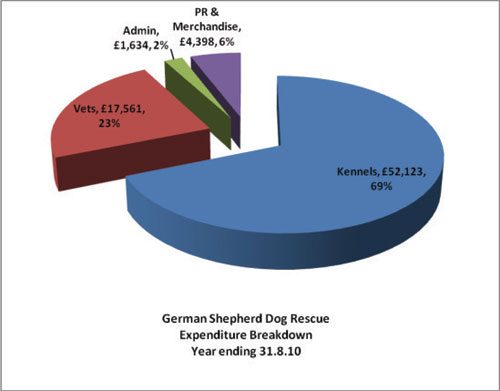 This year, we have had our first year with a proper organised fundraising events timetable, which has been great PR for GSDR and has brought in some much-needed funds for the rescue. We have had to allow for some expenditure for the events side to purchase merchandise, banners and other materials for the stand. This is money well spent and provides us with a good return on investment. We have just purchased a small exhibition stand of our own so that we can display our information in a more professional way.

Our fundraising events this year, have raised £9,817.62 gross which amounts to £8,225.39 net. The costs were wholesale costs of merchandise, rosettes, collection buckets, collection tins, banners etc.

This would be a good point to thank all those involved in the fundraising events, both the two legged and four legged volunteers. The feedback has been very positive from volunteers attending the events, and from members of the public attending the stand. Our four-legged friends have behaved impeccably on the stand and have been great ambassadors for the breed. Olly Murrs has been an absolute superstar but needs to take a bit of time off now from kissing all those ladies and babies.

Things are very busy behind the scenes with plans for next year well underway and we hope to have an even bigger program next year so hope that we can count on your support again. Fundraising and events will play a big part in our program next year as we must strive to bring in more funds if we are to continue to help the many GSD's ending up in rescue.

Although we do try to keep costs down to a minimum, we do have some administrative costs which are necessary if we are to step up our activities and grow even bigger. 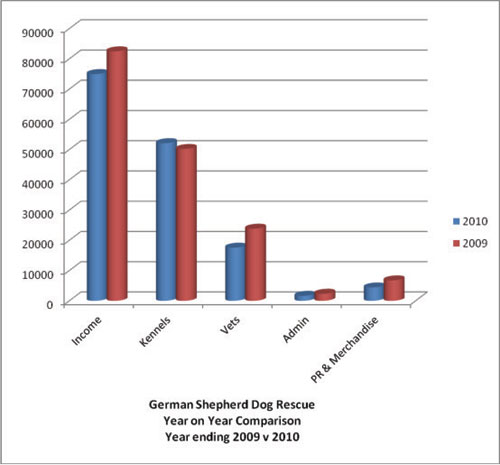 In 2009, our income was more than in 2010, and whilst our kennel bills were about the same, veterinary fees were higher. We were granted charity status in April 2010 so we have changed our accounting dates to reflect that. Our accountant will be making our accounts up from August 2010 to March 2011 for our old status which means our charity accounts will run from April 2011 to March 2012.

Obviously, with charity status, we would hope to increase our income with grants, donations and gift aid. We are also getting more people signing up to standing order monthly donations.

We have registered for Gift Aid and we are just waiting for a number from HMRC. A quick rough calculation for estimating gross income for HMRC does look as if our income will be less this year but that was without taking into account extra revenue that should come our way now we are a charity. Obviously, the recession is biting as people have less money.

Here are just some of our plans that are ongoing and that we hope will make a big difference for GSDR in 2012 and beyond.

GSDR started originally as a bit of a hobby for me when I lived up there in Scotland and I never dreamt that it would grow the way it has. It has now become one of the biggest and I think, one of the best specialist breed rescues in the country.

I didn't see that coming! This could not have happened without all of the volunteers. Volunteers generally join the rescue because of their passion for this wonderful breed and they have all played a part in the success of this rescue.

We all have limits on our time and resources and each of us does whatever we can whenever we can and that at times it can be all consuming, overwhelming and it impacts on family and home life. This has been a problem particularly for those in co-ordinator roles.

Volunteers are increasingly put under pressure by people outside the rescue who make demands without any thoughts for the volunteers. The public doesn't always appreciate that volunteers are giving up their free time to help them.

Hopefully, we can all ride through these difficult times and with our plans for 2012 and beyond, we will grow even bigger and stronger.

Many have tried to emulate GSDR but failed. We have a fantastic track record and an excellent reputation. I know we don't get it right 100% of the time but we will keep improving and building on what we have already achieved.

We will shortly be producing another newsletter to keep everyone informed, which we will aim to produce every quarter.

So email your stories, pictures or ideas for features.

Other costs for the rescue

With the festive season soon upon us please visit the GSDR merchandise page for items that would make great stocking fillers and don't forget the GSDR Christmas cards and 2012 wall calendars or keep a dog safe in kennels. £6 will pay for one kennel space for one day. Every penny counts

We need your donations to help us continue