Princess Ruby the German Shepherd, A Sad Case of Neglect

Despite her ordeal, Princess Ruby is a beautiful, playful, sociable sweetheart and everyone at the vets has fallen in love with her. Princess Ruby is a gentle, clever fun dog who you could take anywhere and she did not deserve to be treated this way.

Nell now called Princess Ruby was rescued in an appalling emaciated state weighing just 20kgs, much of her fur was missing and she was covered in open sores. She is now safe in foster with a GSDR volunteer. This is her sad story 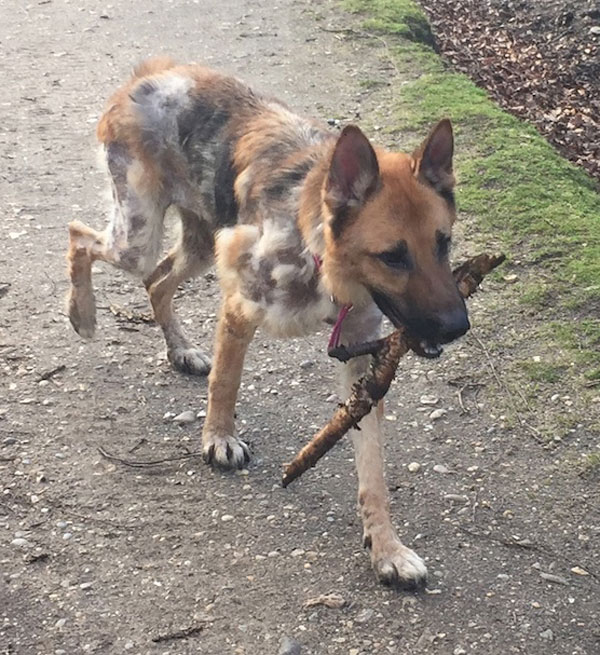 Staggering that her appalling condition hasn't been reported before!! 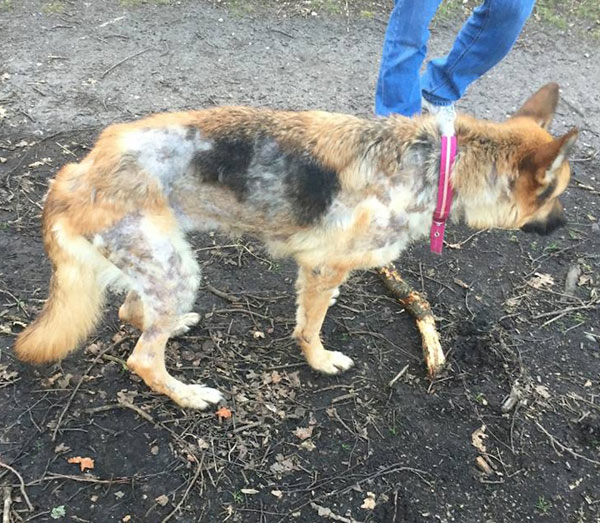 When her rescuer visited Princess Ruby, he was appalled and immediately contacted the RSPCA who told him to take the dog to an emergency vet! The vet told our volunteer that when first admitted Princess Ruby was emaciated and weighed just 20Kg and 30% of her body was covered in open sores. She smelt terrible, she was anaemic, dehydrated and extremely weak. She had to be carried down the stairs of the flat and the vet confirmed that she could barely stand. One of the vet nurses stated that she had never seen a dog in such a bad state. 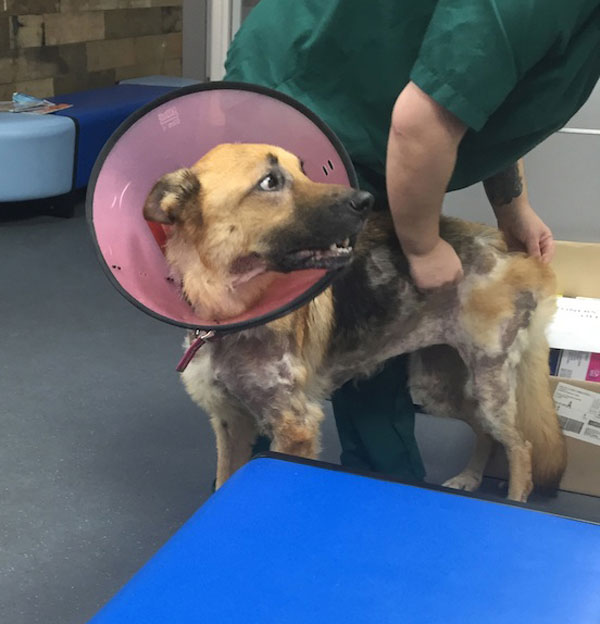 We were contacted by the vets to see if we could help Princess Ruby as her rescuer cannot keep a dog. When our volunteer first met Princess Ruby, she couldn't speak for the first 5 minutes because she was so shocked and upset. Even though Princess Ruby is getting better, she is still in very poor condition. She has put on some weight and is now 24.4kg but she looks very skinny, about a third of her fur is missing and she still has some sores which are beginning to heal. 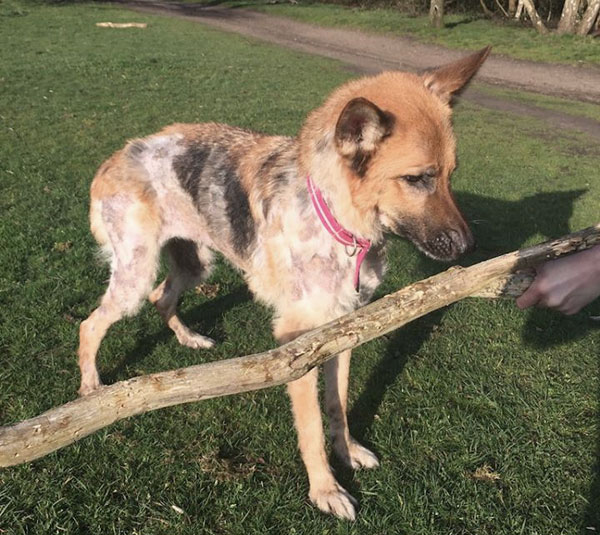 So far, the skin condition is unexplained although her rescuer believes it may be an allergy which was exacerbated in her smoky household. He also thinks boredom and lack of attention may have played a part too. The vets have said that her body condition is so poor that until this is corrected, it is impossible to know the extent to which overall poor health is a contributor and to evaluate and seek a cause for the skin problem. 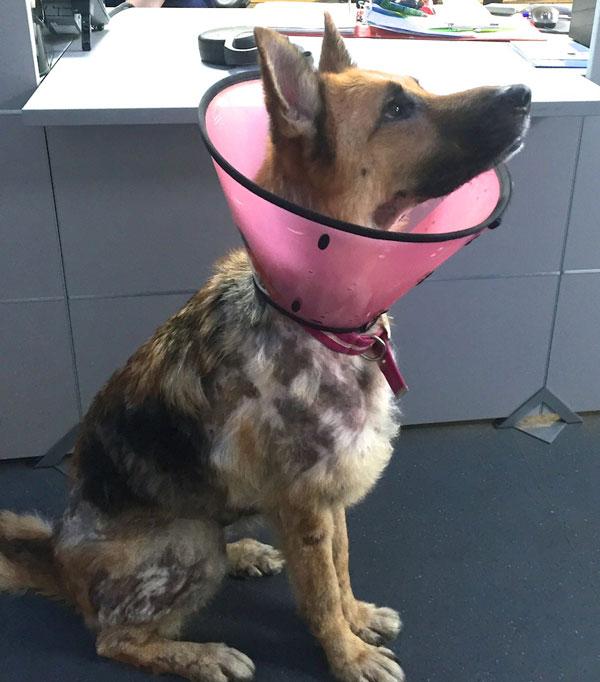 Princess Ruby has some previous medical history and apparently had been treated for skin problems before, but her owner stopped taking her to the vets when the insurance policy limit was reached. She has been at the vet's a few weeks now where the aim has been to improve her overall wellbeing and to keep costs within her rescuers budget. 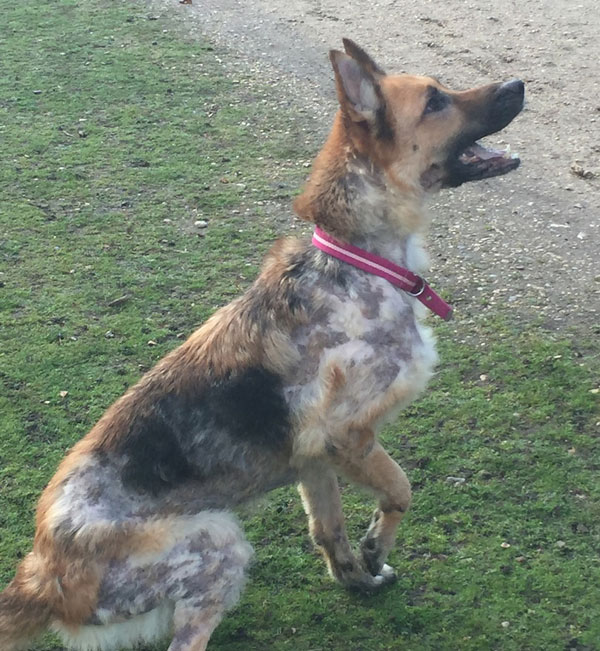 A lovely friendly girl despite her terrible ordeal

Going forward, Princess Ruby needs a healthy eating program, antibiotics and regular baths for at least 2 months. She will of course also need walks, games, training and stimulation but most of all love. At the moment she is wearing a buster collar when unsupervised to stop her biting her skin. 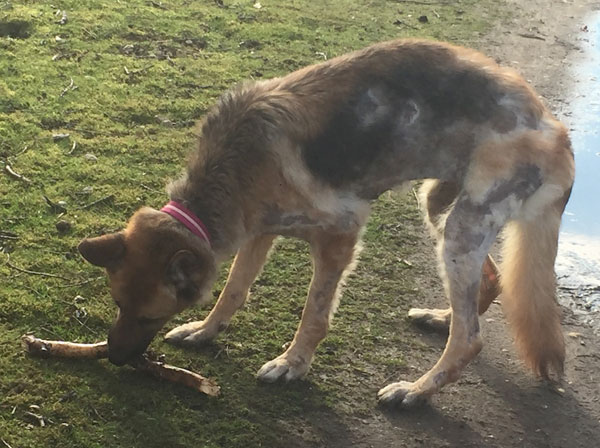 Princess Ruby on the long road to recovery

Despite her ordeal, Princess Ruby is a beautiful, playful, sociable sweetheart and everyone at the vets has fallen in love with her. Her rescuer is totally smitten with her but sadly can't keep her. This kind man has paid for all her treatment so far. 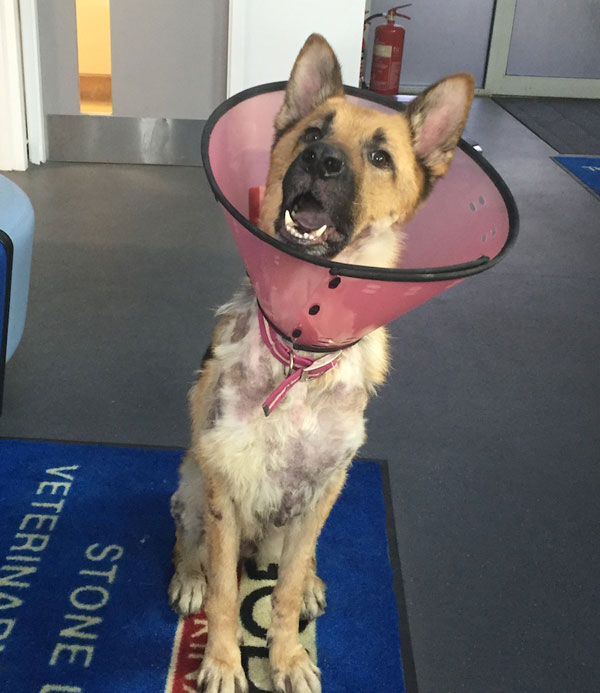 Princess Ruby knows she is going to a kind, loving foster home with a GSDR volunteer and some new friends

Our volunteer went for a walk with Princess Ruby and her rescuer on Wimbledon Common for about an hour.Princess Ruby thoroughly enjoyed her romp, she loves other dogs, she loves to play and she was keen to make friends with humans too. She is very intelligent and learns quickly.

The staff at the vets have been teaching her some basic commands, she obediently jumps on the scales to be weighed and when she is shown her pink buster collar, she willingly comes forward and sticks her head through it.Princess Ruby is a gentle, clever, fun dog who you could take anywhere and she did not deserve to be treated this way.Princess Ruby is now in foster with a GSDR volunteer where she has lots of new friends to play with.

Princess Ruby will shortly be looking for her forever home, one where she can learn what it is like to be loved and cared for properly.

If you would like to adopt Princess Ruby, please fill in an adoption form